Wicked was published in 1995 and over the years several people have told me I just “had” to read it. The musical has a great soundtrack and a happy ending, so the book seemed like a good pick for our group. And it was. Although not in the way I had anticipated! 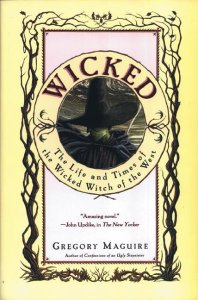 I struggled reading it, at least for the first half. Little seemed familiar to me—the descriptions were coarse and sexual, and the gnarly baby teeth gave me serious nightmares. I could tell that it was heavy with symbolism, religious and political innuendo, and much that seemed to pass directly over my head. I struggled to keep names and locations straight, and nearly panicked at the thought of my book club members’ responses!

Of course, I shouldn’t have worried. Although I wasn’t alone in my struggles, most members had tried to finish it. Some had read it before, liked it, and wondered why it was more difficult this time. Another still considered it one of her favorite books and had found even more to savor at this reading. Reading it for the first time, one member was ready to start on the second book in the series, although he had been disappointed in the ending.

Most of us were not surprised that the Witch was not as evil as she was portrayed in the Wizard of Oz. We discussed whether any fairy tales are intended only for children and what could be found with deeper analysis. Our last two books dealt with the nature of evil and I can’t help but wonder how much of our understanding and tolerance is because we are a well-read group. Does this transfer to our understanding in real life? How could it not?

On several occasions the room was quiet with thought. Several members agreed that the use of Animals vs. animals as a theme was not just a statement for animal rights, but for the rights of all societal outsiders – and Elphaba is the ultimate outsider. We disagreed whether Elphaba would ever really add wings to monkeys. The author was working with popular source material and he stays true to things not assumed, although more is inferred than we might otherwise imagine! The opening prologue served not just to set the stage, letting us know that the story would eventually lead to a known world, but showed us how people use gossip to help them understand their world, explaining things that don’t make sense.

We were surprised that Frank L. Baum’s classic was first published in 1900 as America’s first original fairy tale. We did not discuss the nature of science fiction and fantasy and how it serves to point out moral truths, creating a recognizable world that is still separate enough to keep our defenses down and penetrable. I am glad I read Wicked, and like others in the group, I would like to know how the story is continued. One member who has read more of Gregory Maguire’s books said that this was his heaviest. Perhaps one day . . . .

1 thought on “Wicked: the life and times of the wicked witch of the West Discussion Journal”