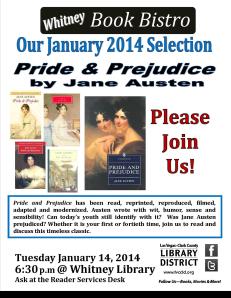 Austen.  Her books have been so widely read – loved and hated!  Made in to movies. Adapted. Imagine Pride and Prejudice and Zombies by Seth Grahame-Smith. She was the favorite author of my English Novel professor in college.  Sir Walter Scott’s quotes make him seem smitten. Twainquotes.com shares many negative comments, ending in this excerpt from a letter written by Mark Twain in 1898, “Everytime I read ‘Pride and Prejudice’ I want to dig her up and beat her over the skull with her own shin-bone.” I just can’t get past, “Everytime I read . . .”!

Fortunately, several members had either never before read Jane Austen, or had read Pride and Prejudice in school and no long remembered it – perhaps even forgot it because it was required reading! Many of us asked, why is this considered great literature? Or, it was laborious to read, how in the world do high school students get through it?

I am not sure that Jane Austen’s works are considered great literature. One of the library’s Great Courses DVD sets, Classic Novels: Meeting the Challenge of Great Literature, does not include any of her books. We discussed the importance of considering the time the book was written, a period of great social change. The American Revolution. The French Revolution. Not a political book, but definitely a social one. A book of manners, behaviors, and opinions about the time during which it was written.  It is not an historical novel, but it gives us a glimpse of history. One member pointed out that we cannot be sure that the words pride and prejudice even had the same meaning to the author as they have to us!

We discussed whether or not technology, such as washing machines, has decreased the need for men to find a wife. How men can now stay home and care for the household. About arranged marriages and the role of Internet dating. About the time spent walking. And walking. And walking. To town. Through gardens and around the estate grounds. About the quiet – compared to teenagers walking in malls or meeting for coffee (and a donut!). About lust versus love. How great a role did the wealth of Mr. Darcy really play in Elizabeth’s sudden change of heart? Jane Austen was only 21 when she first wrote this story, how did that influence her characterizations? Why is Pride and Prejudice the most popular of Jane Austen’s novels?

One member asked about the name Jane.  Why did Jane Austen use it in her novel? Did she identify with that character? Although I imagine this question has been asked and researched somewhere, we were stumped. I think the consensus was that it must have been a common name. Yet, I have come back to that question again and again. Although I had always assumed that Jane Austen identified with the spunky character of Elizabeth Bennet, the one character who showed the least pride and prejudice was Jane Bennet. Names are always important. As are the questions. Thanks for joining the discussion.