With all the construction going on in our library this month, meeting in our usual location seemed like a gift! Although the discussion doesn’t officially start until 6:30pm, many of us arrived early to get settled in, look at the discussion questions, and visit. The room was bright and warm, soiled from years of use, too few tables for our large group, yet the friendly faces and lively chatter were refreshing. 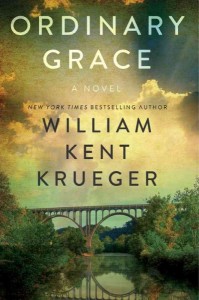 Everyone seemed to like the book. Because of the religious references and easy mystery, I had anticipated some possibly serious dislike, but members were impressed by the writing style, the nostalgia, the quintessentially American story. Several of us remarked on the food descriptions. Instead of expecting a novel of suspense, we accepted, as one member described, “a novel of characters.” One member had been so engaged by the writing that she never snuck a peek at the end (as she admitted often doing!).

Several members were particularly moved by the father’s sermon after the loss of his daughter. We discussed the title and the concept of grace. One member wished she had thought of the term “ordinary grace” when a family member would use gatherings as an audience during holiday dinners. Another reminded us of the author’s use of a quote from the Greek playwright Aeschylus, “the awful grace of God.” Still another had been inspired to lookup and find a multitude of meanings for the word grace and ordinary grace.

The mother, Ruth, was well liked by our group. She was not a typical minister’s wife, although her musical talent fit perfectly for the position. Nathan was so calm and caring, forgiving, and never seemed to raise his voice, even when justifiably angry. Emil Brands gave us the most lively part of the discussion. Was he “blind: to others, self-centered, recluse, or outcast? Was Ariel an angel? A typical infatuated teen?

As we discussed possible unanswered questions, everyone wanted to know what had happened to Nathan in the War. We wanted a better understanding of the relationship between Nathan and Gus. The wrapup at the end seemed too easy for some of us.

One member was incredibly disturbed by the immorality of listening in on private confessions and the devastating consequences. Small-town morality, homosexuality, and more than I can even remember filled out our discussion. As I watch a group of unrelated people, drawn together by the community of books – shared experiences that may never have been but that will always be better for our discussion – I can’t help but feel that all is as it should be.