LaRose is the second book by Louise Erdrich that we have read in the Whitney Book Bistro. The novel is particularly relevant to Native American History month because it presents a snapshot of blended families facing some of the same difficulties of peoples everywhere, including grief, loss, changing technology, stereotypes, politics and war. Erdrich offers a traditional Shakespearean Iago, but allows us to see how he was created. She shows us the power of tradition in the offering of LaRose, the power of magical realism to reveal truths felt if not seen, the power of pain and suffering, the power of connections. The blending and change of cultures is as inescapable as the changes wrought by technology, wrought by war, and even wrought by accident. 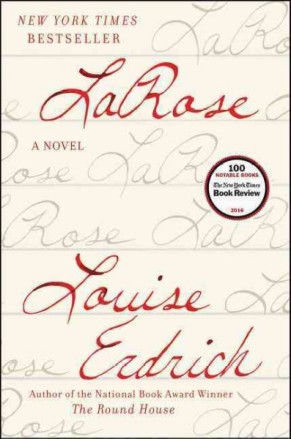 Our first responder was a member who couldn’t attend the meeting but stopped by to pick up our next book. The novel had not hooked him, had too much detail – which he described using his hands as if he were painting a picture or weaving a tapestry, showing his appreciation if not his satisfaction.  I shared that it seemed disconnected, even rambling, and he agreed. The novel was difficult to get into, slow at first, then filled with characters and detail that would take more readings to fully appreciate.

Our discussion group turned out to be small, three of whom hadn’t finished the book. I didn’t get the feeling anyone was thrilled by it, although we agreed that the writing was beautiful, even if the story was bleak. One of us found none of the characters likeable. Another found Romeo’s resurrection after throwing himself down the church steps to be unbelievable. I found the affair between Emmaline and Father Travis to be too much, but another member had re-read the beginning of the book and realized the author had begun laying the groundwork for the affair early on, possibly even as another form of revenge. We laughed at the parents’ altercation during Maggie’s volleyball game.

One of us had made a connection to grief and the loss of a child in the 2017 film, Wind River, reading a transcript from the film:

“Bad news: You are never going to be whole – not ever again. You lost your daughter and nothing is going to replace that. Good News: As soon as you accept that and you let yourself suffer, you allow yourself to visit her in your mind and you’ll remember all the love she gave, all the joy she knew. You can’t steer from the pain.  If you do, you’ll rob yourself of every memory of her—every last one—from her first step to her last smile. Just take the pain. You take it. It’s the only way you’ll keep her with you.”  (Jeremy Renner as Cory Lambert)

Another member shared passages that stood out:

“Before they took LaRose to the Ravich house last fall, Landreaux and Emmaline had spoken his name. It was the name given to each LaRose. Mirage. Ombanitemagad. The original name of Mink’s daughter. That name would protect him from the unknown, from what had been let loose with the accident. Sometimes energy of this nature, chaos, ill luck, goes out in the world and begets and begets. All Indians know that. To stop it quickly takes great effort, which is why LaRose was sent.” (105)

This passage drew a connection to the other chaos let loose in the world after the murder, albeit in defense, of Mackinnon by LaRose’s ancestors:

“Mackinnon’s head, rolling laboriously over the snow, its hair on fire, brightly twitching, flames cheerfully flickering. Sometimes it banged into a tree and whimpered. Sometimes it propelled itself along with its tongue, its slight stump of a neck, or its comically paddling ears. Sometimes it whizzed along for a few feet, then quit, sobbing in frustration at its awkward, interminable progress.” (132)

We ended with a discussion of revenge and we were hard-pressed to find any value in it.  One member reminded us that a grudge damages most the person who holds it. Then we discussed LaRose’s eight-year-old fury against the fearsome four. It was endearing, and one of us made an important connection to closure. Our discourse was as disjointed and hard to follow as the book was for many of us.  As usual, we discussed more than I have captured here and we moved on, as we always must. Until we meet again, next month! Happy Thanksgiving.