That was our official first responder for our discussion of Before the Fall by Noah Hawley.  Heads nodded around the table. We were still laughing because we had met at 6pm to mingle and discuss other books, but as usual, at least some of us can’t resist starting early! Our discussion took off, with comments bouncing around the table.

How did the co-pilot pass the required psychological tests? Of course, we were then 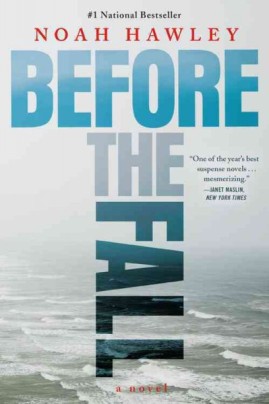 reminded of the October 1st, 2017, Las Vegas tragedy in which a wealthy man killed 58 people, injuring physically, and psychologically, many many more. Still without explanation. Or “the young co-pilot who deliberately crashed a Germanwings airliner into the French Alps on 24 March 2015, killing himself and 149 other people.”[1] One of us commented that the extreme psychological testing of astronauts did not help identify “a NASA astronaut who the authorities say attacked a rival for another astronaut’s affection at Orlando International Airport on Monday after driving more than 900 miles from Houston to meet her flight.”[2] Is there any way to protect ourselves from this kind of insanity? And then we discussed the recent heroic act of a Mali immigrant who climbed up the side of a building to rescue a child in France.[3]

One of us couldn’t help but picture Larry King in the description of news anchor Bill Cunningham. She was also inspired by the references to Jack LaLanne[4] and his belief that anything is possible. We were all impressed by the author’s character development and some of us wanted to know more. We shared possibilities for the future of Scott and Eleanor, discussing the need for romance – or not.  And what about the title?  Although we agreed that we understood the significance of Before the Fall, since the author describes each character’s thoughts and actions leading up to the crash, we disagreed about the effectiveness of the title. One of us was certain that she wouldn’t remember the book if someone asked her if she had read it.  She wanted a more striking and relevant title.

Another member mentioned how confident and strong Scott was to stand up to Bill Cunningham in the end, and we decided that Scott had grown strong because he was needed.  He was needed to rescue the boy and, like the old saying, if you save a life you are responsible for that life (forever). This led to the question about whether the crash and its story were the result of fate or coincidence.  It could be either, with one of us concluding that man always looks for meaning rather than accept coincidence.

In general, we enjoyed the mystery and some were surprised by the ending. The discussion actually started even before the meeting, as members who visit the library stop to chat. The similarities to real-world events and references to other works, including our discussion, are now part of our shared experiences. We have gained empathy and insight.  Please join us!

“In this age of fitness gurus, personal trainers, and exercise videos devoted specifically to achieving “buns of steel,” it is difficult to imagine a time without health clubs, when weight training and aerobic exercise were viewed by doctors as extreme and potentially dangerous activities. However, in 1936, when LaLanne opened the first fitness club in the United States, many considered him a kook and a fanatic. Though he was arguably a fanatic on the subject of health, his exercise show foreshadowed a national obsession with fitness, and LaLanne himself set many of the current trends by inventing the first weight machines and producing the first exercise video. LaLanne’s simple and accessible approach to exercise continued to gain wide popularity until and beyond his death, and his show is seen as a predecessor to nearly all fitness shows, from Wai Lana’s yoga program to Jillian Michaels’s The Biggest Loser.”                                                                      Jack LaLanne. (2013). In St. James Encyclopedia of Popular Culture. Detroit: Gale. Retrieved from http://link.galegroup.com.ezproxy.lvccld.org/apps/doc/K2419200678/BIC?u=lvccld_main&sid=BIC&xid=e27599ea

1 thought on “Before the Fall Discussion Journal”