This month we met to discuss our greatest generation – as revealed through the eyes of Daniel James Brown, Joe Rantz and The Boys in the Boat. The group did not unanimously enjoy it, but everyone seemed to have been moved by it.  Some found it slow, easy to put down. Others were gripped from the beginning. One member believed that the book should be required reading for young adults and several others agreed. We realized that the story had the sheen of a tall tale, like when our grandfathers told us they had walked nine miles to school, in the snow, uphill both ways! And yet we were still awed by the hardship and the resilience, the power, strength, and opportunity. 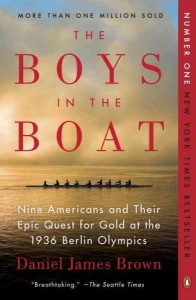 We shared stories from our own parents’ and grandparents’ experiences during the Great Depression. Thula was generally considered a villain. But is it fair to judge her from our modern parenting beliefs? After learning of their struggle, can we imagine what would have happened to the boys in the boat if the United States had boycotted the 1936 Olympics? What about the Olympics in Brazil—the Zika virus and reports of dirty water? How fortunate the boys were to have had each other, to have had their boat builder, George Pocock, and his outstanding insights and skill. How different the world is now, with fiberglass boats and technology for tools and obstacles.  How will our descendants view our world and our struggles in another eighty years?

We discussed the Olympics, sports and fitness.  One of us described the athleticism in elite bicycling. Only one of us had played a team sport in school—basketball—and she corroborated the camaraderie. We discussed how little we knew about the precision and skill necessary for rowing. I had done some minor internet research into the fittest sport and found it to be quite controversial.  ESPN listed boxing first and rowing 39th.  Forbes listed squash first and rowing second. Men’s Fitness reported in 2013 that rowers have the healthiest hearts.[i]

One member found it hard to believe that the anti-Semitism would not have played a bigger role in the story and the boys’ experience; but then we remembered that the ongoing prejudice in the U.S. allowed us to ignore the realities of the Holocaust for as long as we did, to continue to discriminate against African-Americans, even those fighting the war for us, and to relocate and incarcerate Japanese-American citizens – all of which we’ve read about and discussed before.

I first decided to select The Boys in the Boat for our book club because my husband kept exclaiming and reading me sections out loud. Enthusiasm is contagious. One of the members mentioned once that my recap is a lot more organized than our meetings seem. It reflects my memory, just as the book is the author’s impression of a memory. Every member of our group brings something to our meeting – presence, attention, ideas, experience. Thank you for joining the discussion.

2 thoughts on “The Boys in the Boat Discussion Journal”