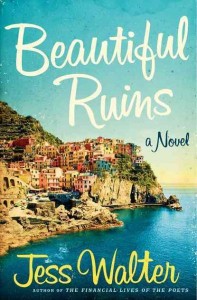 At the start of each meeting, I usually ask if people want to share their responses to the book — did they like it, love it, hate it, or any number of possible first reactions to a book.  This can be risky, like a leap of faith, asking people to share what might turn out to be a minority view. Often, many of us can appreciate the book much more after the discussion, looking at it through others’ eyes, discovering meanings missed, and, like laughter, enthusiasm can be contagious.  But that immediate response may be the truest, because it reflects the likely impact of the book — undiscussed, perhaps cast aside in favor of another book, or cherished and passed on among family and friends.

This month, we discussed Beautiful Ruins by Jess Walter, and the first responder said she had trouble getting into the book and wondered if anyone had been unable to finish it. Several of us did find the book to be slow to start, and the changing characters and times were frustrating at first. One patron found it repetitious and another wondered about its relevancy, especially since so much concerned the making of the movie Cleopatra in 1962. Who is the audience? Would younger readers even care?

In general, most members seemed to like the book. Characters we dislike at the beginning become more interesting by the end and the last chapter recap of what happened to all of the characters, even minor ones, was mentioned by several of us. Two members had listened to the audio version and said that the reader was excellent.

The discussion questions I had printed from litlovers.com were especially helpful this month, although I forgot to distribute them with the books, so we hadn’t all been able to think about them ahead of time. The intersection of art and life brought up several images–from Pasquale’s vision of the tennis court, the bunker art, reality shows, the movie version of Lydia’s play about Pat, and more.   Many of us remembered the furor surrounding the Elizabeth Taylor – Richard Burton love affair and one member had seen Cleopatra because of the publicity — just like in the book! Art intersecting with the book club!

We continued to jump about among the questions, discussing the theme of love that ran throughout. I hadn’t actually thought of the book as filled with humor, and the question made the group think a moment, but as we discussed it, we found bits of humor, words and images, that made us smile — the battle of insults between Pasquale and his friend, the absurdity of the reality shows. We skipped over many questions that I think would have been great to discuss.  Although meeting for only an hour keeps us on task, it can leave a great many things unsaid; but I like to think of it as jump-starting our brain.

We were left with several questions, about how much of this fiction book might really be true. (according to imdb.com, Richard Burton died in 1984 and had three children, one with Elizabeth Taylor). Could you really bake lye into a loaf of bread and would it kill you? And who, in 1962, would have nausea, miss a menstrual cycle, and believe cancer over pregnancy? Sometimes, truth is stranger than fiction, so we get back to that art intersecting life question.

Beautiful Ruins is a book that spans 50 years and has at least eight main characters and their perspectives. One member’s first reaction to the book was that the main point is that “we want what we want.” Every character and every reader comes back to that reality. In  the book, Alvis Bender tells Dee, “All we have is the story we tell. Everything we do, every decision we make, our strength, weakness, motivation, history, and character—what we believe—none of it is real; it’s all part of the story we tell. But here’s the thing: it’s our  . . . story!”  (pg 266 )  Another member highlighted Pasquale’s mother: “ ‘Sometimes,’ she said,’ what we want to do and what we must do are not the same.’ She put a hand on his shoulder. ‘Pasqo, the smaller the space between your desire and what is right, the happier you will be.’ “ (pg. 304) I certainly want life to continue intersecting art in the Whitney Book Bistro!