To most of the book club members, the pilgrimage of Harold Fry seemed unlikely indeed – but believable. With a mix of incredulity and inspiration, we discu 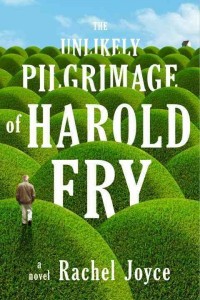 ssed the impetus that could motivate someone, after years of stagnation, to pass one mailbox after another and start on a journey of 87 days, over 627 miles and a lifetime of memories.

We discussed the meaning of extraordinary and the perspectives, negative and positive, that make the difference between extra and ordinary. In this story, we know so little about Queenie; but we know that she had an extraordinary impact on Harold and Maureen.  Did she know it? With reflection, both Harold and his wife realize that their memories have been compromised by pain and loss. How many of us have mistaken our own lives for ordinary, or worse? What will inspire us to look back, and forward, finally unburdened?

One member noted how often spouses separate after the loss of a child. Others commented on the importance of strong communication and devotion. Why didn’t Harold and Maureen divorce? Sometimes stagnation is easier than action. What exactly are yachting shoes and why would Harold insist on keeping them despite blisters and injury – symbolism or penance? We decided on both. Several members commented that Harold and Maureen would not need counseling because they had created their own.  Maureen’s action in placing each one of her outfits together with one of Harold’s, his coat sleeve in her pocket or over her shoulder, was touching and incredible therapy.

What about the joiners? Our group dismissed them with distaste. This was Harold’s journey and although we could see the reality and relevance in that part of the story, only the dog seemed worthy of our notice. Many of us mourned Harold’s loss of the dog and one member voiced how sad it was that Harold had not allowed his son to get a dog.

The hour discussion flew by. We discussed much more than covered here and less than we could have.  We had a great turn out (11), including two new members, and I hope everyone enjoyed the book and the discussion as much as I did!