I didn’t choose Lightning Strike, by William Kent Kreuger, for the name, but it’s August and we’re having monsoony weather for what seems like the first time in ages. Dark storm clouds break the monotony of the haze and glare that usually accompany our hundred-degree plus weather, with thunder and lightning sneaking into our afternoons and sometimes evenings. Although the air outside is also sticky and uncomfortable, breezes blow cooler and our conversations are charged. As we waited to start, I overheard discussion of a thousand people stranded in Death Valley by thousand-year floods.

Our reading and discussions are always impacted by time and place, as are the stories 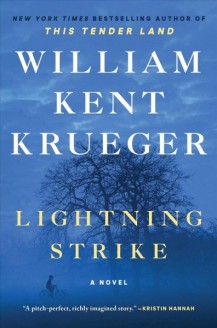 themselves. Lightning Strike starts briefly in 1989 and then flashes back to 1963. Our first responder loved the book, the multicultural themes, the father-son relationship, and the nostalgia it evoked. As a gay man, he could also identify with the anger, conflict, and discrimination between the Ojibwe and the White townspeople. His partner had listened to the audiobook and been struck by the anger the narrator portrayed, highlighting one of the benefits of listening to a book.

Our next responder brought up how much he enjoyed the nostalgia from hearing about Route 66 and more, little brothers and sisters acting as the television remote. Someone commented on the shared experience of watching the same shows together because there was only one television and fewer choices. Another of us enjoyed following the boys around town. Many of our comments during the discussion brought back memories from our own experiences, especially childhood memories.

One of us came from Minnesota, so she appreciated the descriptions but was driven to investigate locations and names. She confirmed that there is no Tamarack County, but there are probably several Iron Lakes and she spent some time viewing videos of the Boundary Waters.

Although one of us was highly critical of Cork’s disobedience, especially sneaking out at night when he was specifically told not to investigate, another of us was envious of his freedom, remembering her childhood in Los Angeles, playing in empty lots and using clods of dirt and grass as toys.

One of the library’s young adult staff joined our meeting for the first time, although she has been reading along with us for several months. She read the book mostly in one sitting. Like most of us, she found it easy to read and was impressed by the multitude of themes the author covered. She identified with Cork because she had been curious and mischievous. She appreciated how the author shared the familial conflict as well as the mystery – every relationship mattered. The story was masterfully, even cinematically, told.

Some of us acknowledged that the first half of the book is slow, but the second half held us through the end. How can anyone be absolutely certain about anyone else’s behavior, particularly in assuming that only white people could commit heinous crimes?[i]  Still, we weren’t all certain that the anger of Liam’s family, his wife and mother-in-law, was believable. We felt that Liam’s integrity was being questioned more than necessary. Yes, he needed to open his mind but he also needed more recognition as an ally, especially from family and close friends. This part of our discussion highlights the importance of our reading diverse literature to help us understand varying viewpoints, to help us connect in reality as well as in fiction – and not just in anger.

One of us was interested in our responses to the spirituality in the novel. He is a Christian minister and has no difficulty believing in ghosts and miracles as presented. Another member noted that there are plenty of supernatural, miraculous stories in the Catholic bible. Two of us noted how common it is for people to feel the presence of those who have died for some time after they have passed. Still another shared how he had nearly drowned as a child and the sense of being saved had felt miraculous. He also felt the presence of something extraordinary while visiting the Basilica in Mexico City. So we discussed how much of our belief is perception. Some of us were less convinced, even critical of the supernatural in the novel, yet another member felt that the spirituality lends gravitas. She said you can’t have a story about Native Americans without it and it reminds us to be open minded.

We met in the Teen Zone, which is a softer, closer environment than our sterile conference room. As always, we discussed more than I covered here and I am sure less than we could have.[ii] The author has seventeen more books that expand on the life of our young hero, Cork, so we can keep going if we want! One of the discussion questions asks if there are any places in our city with spiritual significance similar to Lightning Strike, where Big John is found murdered. Our first responder called out Valley of Fire, a place he takes all visitors. None of us added any other location, but I wonder, now that we have discussed this and upon reflection, if any of us have considered another? I know that I have a sudden desire to make a visit to Valley of Fire.

[ii] I played a clip from a video so that we could hear the Ojibwe language spoken. I also showed a short clip introducing the significance of the language and I recommend an interview with the author in his hometown that shows his great admiration for his father.