Our July selection was chosen and the discussion led by a colleague who is more aware of new and diverse books than anyone I know. Leave the World Behind by Rumaan Alam was easy to read, well-reviewed, timely, multi-layered, and for many of us, frustrating. A family goes on vacation in Long Island and is joined by the owners when the power in New York City goes out, as well as all other communication – cell service, internet, and television. The reader is given insights the characters don’t have, but few answers. 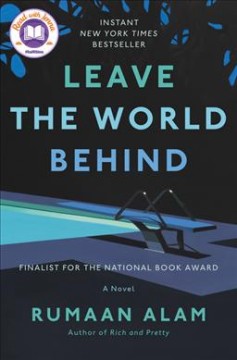 Our first responder listened to the audiobook and skipped forward to find out what happened, only to realize that she couldn’t find the answer.  The uncertainty drove us crazy, even if that was possibly the author’s point—especially now that we are so addicted to technology and immediate answers. Why didn’t George and Ruth go to find their daughter? Why did they still have electricity in the country? Unending whys. Could we even know what we would do in such a disaster? Which is scarier – knowing or not knowing?

One of us was particularly interested in the extraordinary movement of deer and felt that Rose was an explorer, a survivor. She thought the story had the feel of a Twilight Zone.  A new member had seen how highly recommended this book was and isn’t sure why. She could see this as a film by M. Night Shyamalan and was particularly disturbed by the boy’s loss of his teeth. Another of us did not read the blurbs and had no idea what it was about.  He was reading along and the kid lost his teeth with only 60 pages left! It was just sad.

Several people mentioned the grocery purchases that were a page long, going on…and on…and on. Was this to show their wealth, indulgence, the mundanity of their lives about to be upended? We still didn’t really understand or believe their behavior. Was the screaming Hispanic woman even real? Clay’s behavior was odd and selfish enough for him to have been hallucinating. Amanda’s casual nudity was aberrant. The author stated in an interview “We just want to be told what to do and when we aren’t, it is scary. We’ve always needed to know.”[i]

One of us was particularly moved thinking about how lucky we are in the United States.  This story is terrifying because everyone in the story is out of control of their known world.  Yet people all over the world have experienced similarly life-changing events. He specifically referenced the 26th Anniversary of the Srebrenica Massacre recently in the news.[ii] He came back to the helplessness of parents and terrible things that happen every day, including the number of people who die every year of excessive heat or influenza.

We also took a moment to think of books and movies similar to Leave the World Behind, and I brought up our previous selections of Station Eleven by Emily St. John Mandel and Dog Stars by Peter Heller. Our new member recommends The End of October by Lawrence Wright. Our moderator mentioned Age of Miracles, a 2012 book by Karen Thomas Walker that also focuses on how humanity deals with the changes caused by the impending end of the world.

Our moderator ended the meeting by asking from the discussion questions: “If you had read the novel before 2020, do you think you would have had a different response to it? If so, in what way?” Most of us did not think that we would have read the book any differently, considering the reality of record-high lows, which we are experiencing now; the need to bring our desert tortoise into the house for survival; and the freaky dependence on technology that says, “I noticed you are awake, would you like me to turn off your alarm?” In addition, our newest member had been looking primarily for racial issues, something we didn’t discuss but that could give us plenty of fodder for further conversations.  Please read the comments for email responses and add your own if you think of something!

[ii] “The slaughter of more than 8,000 Muslim Bosniaks, most of them men and boys, by Bosnian Serb forces was commemorated in speeches, prayers and song, followed by the reburial of victims whose remains were found in mass graves and recently identified through DNA analysis.” Web accessed 7-14-2021.  https://www.usnews.com/news/world/articles/2021-07-11/bosnia-commemorates-26th-anniversary-of-srebrenica-massacre