At the end of our discussion of Neil Gaiman’s The Ocean at the End of the Lane, we all laughed as one member asked if we ever thought an author was just pulling random ideas and images out of the air. We had discussed meaning and mythology, repressed 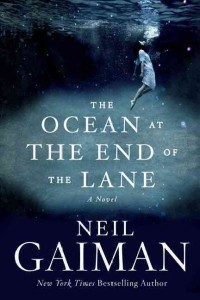 memories, reality and more. The group’s review of the book was mixed – some found it hard to understand, depressing, even purposeless; others found it better than they had expected – but no one seemed particularly impressed.

One member asked why I had chosen it. This was a difficult question because I considered many factors – genre, gender, diversity, subject, awards. Neil Gaiman has crossed my radar for years. According to UXL Graphic Novelist database, “many consider Neil Gaiman to be one of the greatest writers in the field of comics and graphic novels, and he is certainly one of the comic industry’s biggest stars . . . His works American Gods and Coraline dominated the New York Times best-seller list, and both were honored with the Bram Stoker Award and Hugo Award.”[1] I had actually expected The Ocean at the End of the Lane to be harder to read, more like Wicked, and at only 181 pages, I considered it a good choice to challenge ourselves.

One member had researched the mythology of the Maiden, the Mother, and the Crone. She gave us some good information regarding symbolism and the author’s Sandman series. Another had researched the name Hempstock and although she hadn’t found anything definitive, she couldn’t help but wonder if by using the prefix hemp, the author was referring to a drug-induced dream. Many of us remained unclear about whether anything in the story was real. Several members noted how incongruent the father’s constantly serving burned toast seemed, especially once he admitted hating it.

Two members talked about vultures. One had been disturbed by the image of black birds tearing apart Ursula. Another offered her own memory of seeing vultures standing, orderly, like perfect gentlemen, carefully taking their portion of road kill. It is amazing what memories are triggered from our readings and meetings.

I was impressed by the imagery and kept picturing surrealist art – but art can be constantly viewed and considered, as I pass it in a hall or visit a gallery. I would have to keep reading and re-reading to pick up all the subtleties! I actually found The Ocean at the End of the Lane quite uplifting. I am fascinated by how the human mind might perceive and explain the horrors and wonders of the world.

Stories can entertain us, educate us, and make us think. We discussed how, no matter what the author intended, our reception is what matters. If it confuses us, if we miss the point, is it the same as if there never had been a point?