I was the first responder this month because, although I enjoyed parts of Simon Winchester’s book, awed by the talent, dedication, and obsession that made our world possible, the detail was sometimes overwhelming—enough that I skimmed much and worried what I was missing. Before the meeting, I wrote on our white board over 60 words I had looked up or highlighted while reading. Simon Winchester is the author of one of my favorite books, The Professor and the Madman, and his use of language is superb, inspiring, and intimidating. 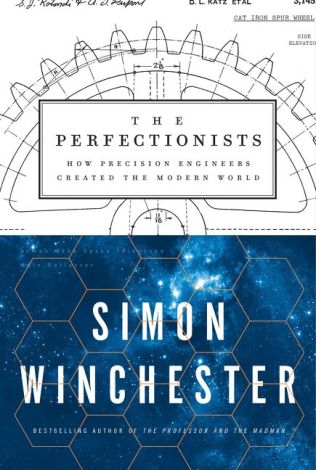 Many of our next responders seemed to agree with my assessment. Many of us hadn’t finished, though we might keep reading. One had finished it just that afternoon; another considered it homework; one of us had divided the page count by days between meetings and set a goal of 13 pages a day, still finding herself five pages short! We are glad we read it. Nods about the room agreed that we were educated by it. I also heard the comments: too wordy, too much detail, repetitive.

Still, we found much to contemplate. Fascinated by the section about cars, we discussed Ford’s choice to make his cars affordable, the details between the precision that created the assembly line and the perfection of the Rolls Royce; and details from other resources than this book, such as that Ford gave his workers a wage higher than the minimum wage and praise for the Henry Ford Museum in Dearborn, Michigan.[i] One of us remembered the deployment of the Hubble Telescope and particularly enjoyed reading those details. We wondered at how much they don’t teach us in school, such as the chicanery of Eli Whitney. We discussed greed versus altruism in invention, the affordability of silicon, the absence of women, the woman who wrote the first transistor calculator code on the back of a napkin, and the woman who died in a box warning about the Japanese tsunami of 2011. We reviewed Simon Winchester’s list of books, amazed at the depth of knowledge and wondering how many research assistants he employs.

Simon Winchester celebrates the precision that created the modern world, but by the end, he seems to join the luddites in a fear for the future and an appreciation for the beauty of craftmanship and its inherent imperfection. In comparison to other non-fiction books we have read, one of us felt that The Wright Brothers by David McCullough had more personality. Many felt that The Perfectionists is more scientific than historical. How much more science and history might we have learned in school if our textbooks had been this appealing? Yet Winchester has been criticized for writing “popular science.”[ii] How thick would a book be that had all the necessary information. One of the strengths of our book club, as with any discussion in general, is in making us think about what we read, to challenge us and give us new perspectives, to encourage us to search further and deeper, to make connections.

I hope you choose to connect with us next month!