Our group has now read three books by Anne Tyler: The Beginners Goodbye, Digging to America, and Clock Dance.  I chose Clock Dance because, after our last few serious books, we could all use the subtle humor and optimism for which Tyler’s literary fiction is well known, especially as we head into the winter holidays.

The group’s reaction was low key, perhaps indicative of the calming effect of a good story, boredom or a reaction to the early darkness. Our first responder took exception with the title. Why Clock Dance? We discussed the girls’ slow, ticking movement versus Willa’s vision of a “spinning blur of color.” One of us used her Kindle to look up the actual passages, helping us to remember and understand. She suggested that the Clock Dance was important because the girls’ dance represented society’s expectation and later the “racing . . . madly whirling” dance was Willa breaking free. 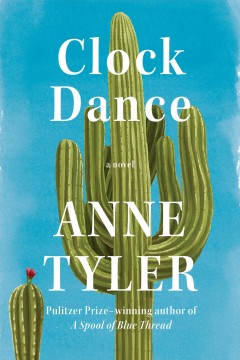 One of us had listened to the audiobook and gave a concise yet negative summary of the story.  She hadn’t liked any of the characters and had not been hooked. She even found the young girls at the beginning to be annoying.  Although one member agreed with that unfavorable assessment, we wondered if the audiobook performance was less engaging than it could have been.

We discussed why Willa was willing to fly across the country to help a stranger. Would any of us? Not only did Willa desire purpose, she needed to be needed. I was particularly struck by a member’s observation that Denise and Cheryl cared for Willa. One member was glad that Willa finally wised up! How could she have put up with Peter so long?

One of us had been so appalled by Willa’s mother that her passion jumped onto the table, drawing our attention to the fact that Willa’s turbulent, traumatized, childhood made Willa a mother “whose prime objective was to be taken for granted.”  We disagreed about Willa’s father’s innocence. Was he truly clueless about his wife’s madness? Shouldn’t he have protected his children?

Willa took after her father. Her son seemed to have chosen a new girlfriend like his mother. Neat, perhaps obsessive Cheryl was not like her messy mother Denise – but she obviously loved her.  And was Denise a bad mother? Negligent? Especially in comparison with Willa’s mother? We discussed cleanliness and someone said, “Nobody’s headstone says she went to heaven for a clean house!” Still others mentioned how they were raised to keep the house “company ready” or remembered keeping the house ready for the minister’s unexpected visit!

The majority of us liked the novel. We found it easy to read.  Anne Tyler is a “good stylist.”  We discussed funny parts.  There is no such television show as Space Junk—we know because one of us looked it up. And can’t we just imagine crime tips in the back of comic books?  We knew how things would likely turn out, but we enjoyed the telling. Anne Tyler makes the ordinary interesting. I know that I found myself looking forward to reading Clock Dance, not for the suspense of the story so much as for a visit with a friend.

Before the meeting we discussed books and trains and grilled cheese sandwiches. You’d just have to be there to see how it all fit together!